Optical microscopes typically use refractive glass lens systems to examine samples at large magnifications. Unlike infrared camera in MWIR and LWIR, SWIR cameras can operate with standard glass optics and do not require the use of reflective optics. Consequently, SWIR cameras can be used with most existing microscopes.

The ability to see into the silicon material comes from the fact that SWIR photon energy is smaller than the band gap of silicon. Furthermore, the typical tungsten light bulb found on most microscopes serves well as the source of SWIR photons.

Nowadays, silicon process technology has advanced to the point that very complex devices can be made. A SWIR microscope is a useful tool for in-process verification for pre-bond and pre-hybridization on critical alignment applications in MEMS (micro-electro mechanical systems), wafer bonding and 3D chip stacking. In post-process operations, it can be used for validation and direct measurement of subsurface features in silicon, GaAs and other SWIR transmissible materials. Fig. 1 shows alignment verification performed with a Xeva 1.7 320 TE1. The highly sensitive SWIR offers superior imaging capability, also for hard to image materials such as doped silicon and silicon with rough surfaces.

Fig. 1 SWIR images of alignment structures in a pair of bonded silicon wafers

In solar cell characterization, scientific grade Si CCD cameras are typically used for luminescence imaging applications. These cameras however have to be cooled significantly to reduce noise and dark current. Moreover, Si CCD based cameras, with a cut-off wavelength at 1100 nm, will only detect the short wavelength tail of the band-to-band luminescence from silicon solar cells at room temperature. By using a SWIR InGaAs camera, about an order of magnitude enhancement of the measured photon flux can be achieved. An InGaAs camera is sensitive throughout the entire spectral range in which band-to-band emission from crystalline silicon occurs. Another benefit of using an InGaAs camera is that it is sensitive to an emission band in the spectral range 1400 to 1700 nm. This defect luminescence is linked to the presence of dislocations and is detectable as a broad spectral emission band around 1550 nm at room temperature.

However, the growing number of metallization layers complicates examination from the front. Fortunately, silicon at low doping levels is transparent to SWIR light, and therefore, InGaAs cameras can be used either in a back or a front examination set-up.

Fiber optic telecommunication networks use SWIR lasers at wavelengths around 1300 and 1550 nm. These signals can easily be seen with InGaAs SWIR cameras. In photonic integrated circuits, signal processing and computing is done in the optical domain. A SWIR microscope is well-suited to verify optical design, check for misalignments or light scattering on such an IC. Fig. 3 for example, shows the light scattered off the top of silicon waveguides on a chip over a length of 0.73 cm. This technique can be used to measure propagation loss in a waveguide on chip. 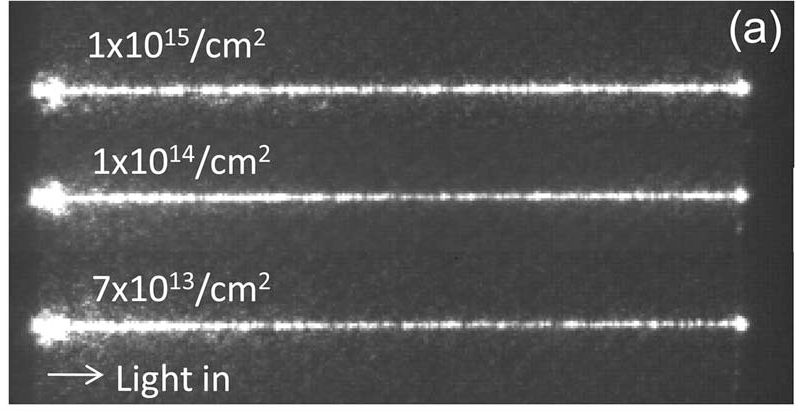