The spatial intensity distribution of a laser beam is one of the key parameters to understand how a laser will perform in an application [COH]. For some applications, it may be sufficient to measure the beam profile during the design or fabrication phase of the laser, for other applications, real‐time continuous monitoring during laser operation is required. For example, in some scientific applications lasers are pushed to the operational limits and continuous measurement of the beam profile is necessary to ensure that the laser is still operating as expected. Also in industrial laser cutting or welding applications, monitoring the beam quality is critical for successful operations. [WAL].

In this white paper, we will address the general need for laser beam profile analysis. Further, we will
briefly describe laser beam analysis instruments and give an overview of laser applications, in particular for infrared wavelengths.

Laser light and other sources of light

Typical light sources are for example the sun, a light bulb, a hot object, an LED or a laser beam. A laser beam however exhibits some unique characteristics:

In many applications, the energy distribution, i.e., the beam profile, affects the performance of the laser or its intended purpose. Two commonly used laser beams are a Gaussian and a flat‐top beam. A Gaussian beam allows the highest concentration of focused light, whereas a flat‐top beam allows for very uniform distribution of energy across a given area. Distorted Gaussian laser beams may lead to problems with focusing. A distorted flat‐top profile will cause non‐uniform illumination.

When using a camera based laser beam analyser, one can measure the full laser beam profile in two-dimensions, in one single frame. Cameras can also work with both pulsed and CW lasers. A drawback of cameras, and especially infrared cameras, is that the resolution is limited to approximately the size of the pixels. As in infrared cameras the typical pixel size is rather large ‐ between 15 μm x 15 μm and 30 μm x 30 μm ‐ the minimum measurable beam size would be limited to around 120 μm. However, the use of lenses allows to re‐image a focused spot, and to improve the resolution.

For camera based laser beam analysers, attenuators typically have to be used to reduce the laser power. Usually a (set of) neutral density filter(s) is placed in the beam path to reduce the power to a level acceptable for the camera sensor.

The complete instrumentation for a camera‐based infrared laser beam profiling system that is currently used typically consists of a computer, a digital infrared camera, software to control the camera, and software to display the beam profiles and make quantitative calculations. Attenuating filters may be required, as well as a frame grabber depending on the interface of the camera.

Measuring the width of a laser beam is not an easy task. The difficulty lies in the fact that laser beams do not cut off to zero at the baseline – there is always energy extending outwards. Therefore, detecting very low light levels in combination with strong illumination in the beam center is critical. In other words, cameras with good sensitivity and especially a large dynamic range are often preferred.

The dynamic range of a camera or sensor is a commonly used term to characterize the ability to measure and distinguish different levels of light. The correct expression would be “intra‐scene” dynamic range as one would compare different pixels or areas in one frame [PCO]. At the upper limit, pixels appear to be white for every higher value of intensity (saturation), while pixels appear black at the lower limit and below.

The dynamic range of a sensor or camera is defined as the maximum signal (i.e., the full well (FW) capacity, or the maximum number of electrons a pixel can collect), versus the noise in dark. If one would neglect the dark current contribution, this would then give the following equation:

In some cases the dark current however is not negligible (for example, long exposure time and/or high sensor temperature). For these applications, one can define the usable or accessible dynamic range: 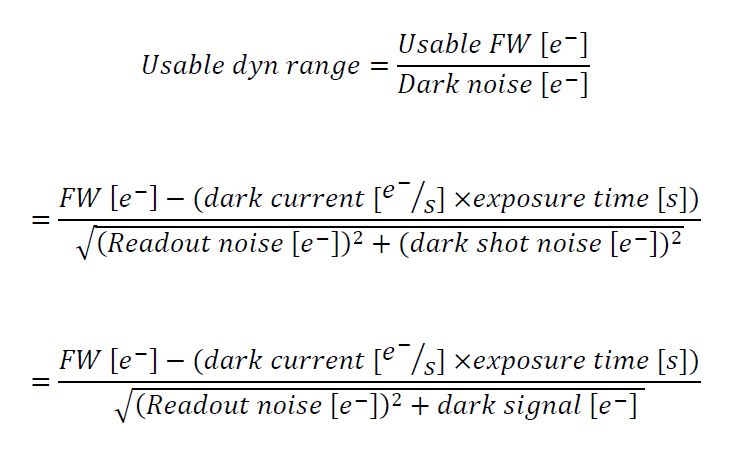 In order to have a sensor or camera with good dynamic range, ideally suited for laser beam profiling, one should select a large FW and a low read out noise. If long exposure times would be required, dark current should also be low.

The SNR parameter is critical for image quality and performance of each pixel. SNR can be expressed as the ratio between the signal and the overall noise:

The shot noise cannot be influenced and originates from both the dark signal and signal generated by incident photon flux. The shot noise always corresponds to the square root of the number of charge carriers (electrons) generated. Note also that the SNR will always increase with increasing signal.

For a large signal, and if one can assume that the readout noise is negligible compared to the shot noise, the equation can be simplified as follows:

For maximum SNR (largest possible signal), this equation can be further simplified:

Note that under these conditions, the maximum SNR only depends on the full well capacity of the pixel. The SNR is a key performance parameter for all camera applications, including laser beam analysis. Similar to dynamic range, the SNR will benefit from a large full well capacity. Since camera based laser beam analysers typically require an attenuator (to reduce the laser power) it will be possible to have a large incident signal on the sensor.

Infrared applications and choosing a camera

Lasers are used in many scientific, telecom, defence, medical and industrial applications. The most commonly used infrared lasers are:

For all these infrared laser types, Xenics offers suitable and proven infrared cameras for laser beam
profiling, aligning and analysis.

Note that some CCD cameras have shown signal response beyond the normal cut‐off wavelength of silicon sensors, out to 1300 nm, even though the sensitivity (quantum efficiency) in this range can be significantly less than it is at 900 nm. This also reduces the dynamic range of the camera when used in this wavelength range. InGaAs based cameras are the ideal candidates for all applications in the 900 to 1700 nm range thanks to the very high quantum efficiency over the complete wavelength range.

In some cases, phosphor coated CCD cameras sensitive to wavelengths between 1140 nm and 1610 nm are used for beam profiling of, e.g., 1550 nm lasers [OPH]. This approach is quite effective when imaging a light source directly onto the array, especially with relatively large laser powers. However, due to the extremely low sensitivity of this phosphor coated Si material, it is nearly impossible to image a reflected beam off an image plane. 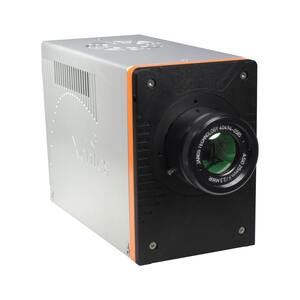 Fig. 2: The Tigris‐640, a cooled MWIR camera available with an InSb or MCT detector.

In the LWIR (Long‐Wave Infrared) range, Xenics offers a microbolometer camera (See Fig. 3) based on an amorphous silicon detector for imaging in the 8 to 12 μm range (application 5). 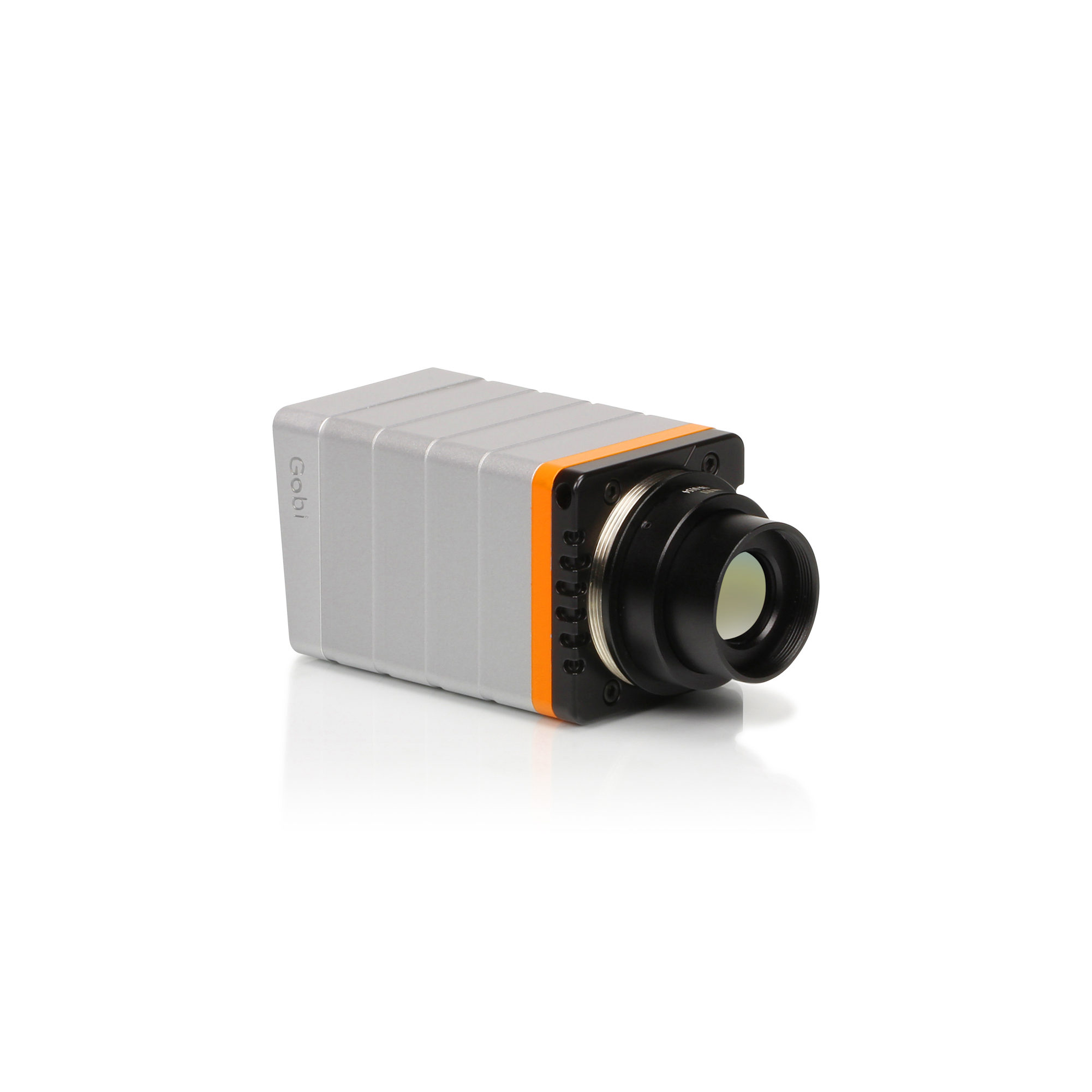 Fig. 3: The Gobi camera series for imaging in the LWIR

One of the key camera requirements for pulsed laser beam analysis is the ability to achieve high frame rates and low image lag. All Xenics cameras can operate at more than 60 Hz in full frame mode, and can be synchronized with a trigger pulse. For most cameras, a trigger pulse can be used to trigger the camera, or alternatively, the laser can be triggered from the camera.

Another essential factor for some laser beam analysis applications, is that the sensor in the camera can be windowless to eliminate interference fringes between the two surfaces. Note that this is obviously only possible for uncooled and not‐vacuum packaged sensors, i.e., for infrared sensors as discussed previously, this is only possible for InGaAs based sensors. Some of the Xenics InGaAs based cameras, can be customized to be used with a windowless detector. In case a window is required, the window should be AR (anti‐reflective) coated for the wavelength of use.

Other important features to consider when choosing a camera are:

The peak power can easily be derived from the total power. The total power on a camera is the
summation of the irradiance on each pixel and the pixel with the highest power can easily be derived
in software. This is a useful measurement when the laser power is approaching the damage
threshold. In addition to peak power the software can also easily find the peak pixel location.

However, note that usually the location of the centroid of the beam is more significant. The centroid
is defined as the “center of mass” of the laser beam [ROU] and can be described by the following
equations: 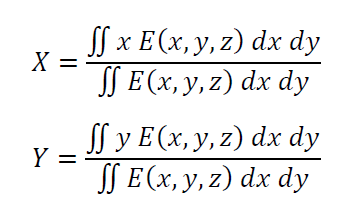 The centroid of the beam is where the energy center is located. Usually, pointing stability of a beam is measured by doing statistical analysis on the centroid [LIU] (Fig. 4 shows the high‐speed SWIR camera used in this application). The beam centroid is very important in alignment of laser beams, in order to know that the beam is positioned correctly in the optics. This plays a key role in many industrial, research and communication applications. 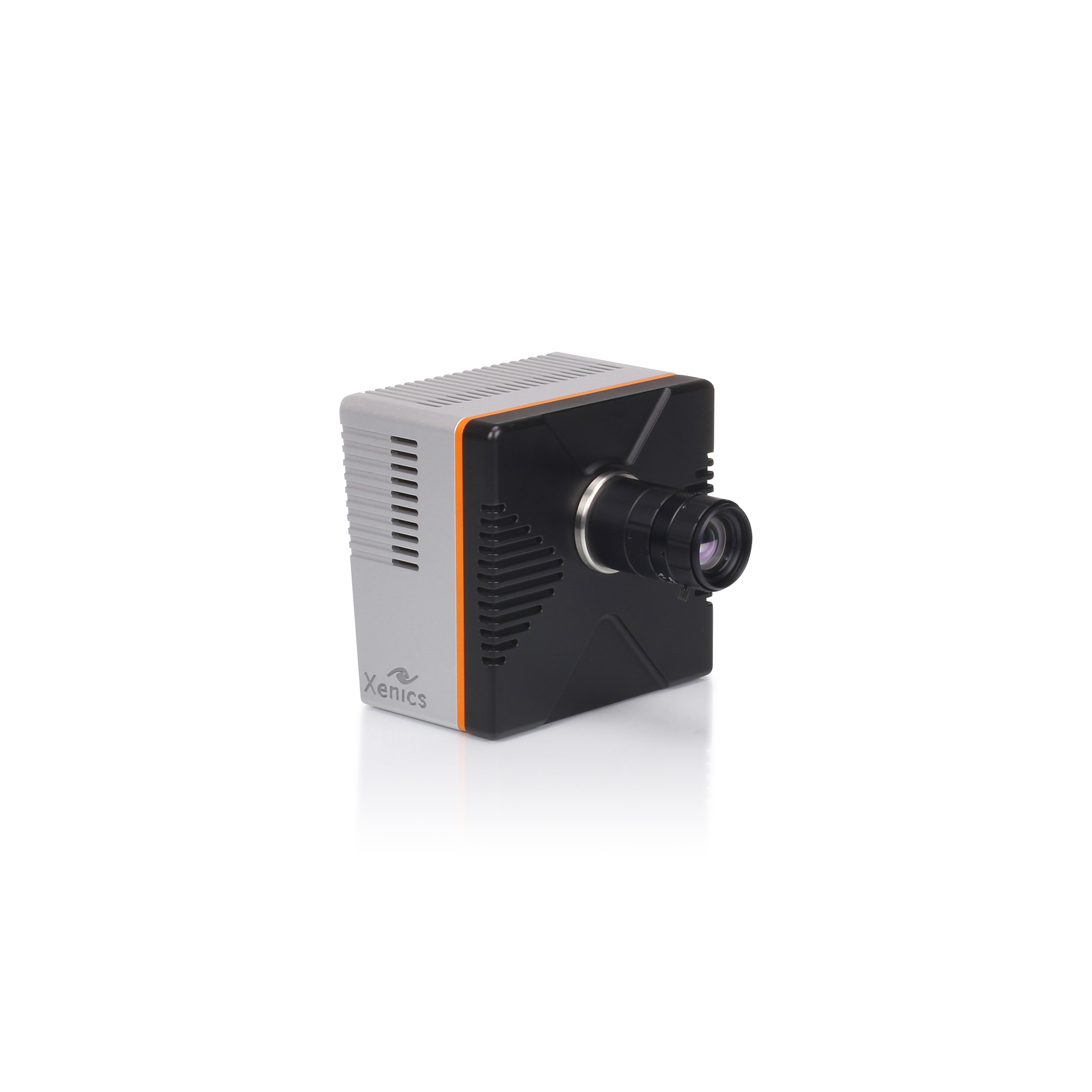 Furthermore, beam width is also essential in calculating the Beam Propagation Factor M2 of the laser (in Europe often the factor k = 1/M2 is used). M2 is often the most important characteristic as it describes the “quality” of a laser beam. A standard beam profiler is not sufficient to measure M2 however – a beam propagation analyser or M2 meter will be needed [COH].

If a laser beam with given width D is focused by a lens (with focal length f), the focused spot size and divergence can be predicted. If the beam is a pure TEM00, i.e., the fundamental transverse electromagnetic Gaussian mode, the spot size d00 equals a minimum defined by the following equation:

However, if the laser beam not only consists of a pure TEM00 mode, the beam will focus to a larger
spot (d), namely M times larger than the minimum spot size (d00). The beam will also diverge M
times faster than an equivalent TEM00 beam of the same width.

The ISO definition for the quality of a laser beam uses M2 as the fundamental quality parameter [ROU]. M2 quantification is not a simple operation, as it is based on several individual measurements taken at different propagated distances (beam propagation analysis), and one of the key challenges to accurately measure M2 is precise determination of the beam width.