Hyperspectral Imaging is the answer to the growing need of capturing the finest possible differences in materials. Manufacturers are developing and constantly improving hardware and software components for this purpose. However, high costs and technical aspects limit the use of this technology in some applications. It is therefore worthwhile to evaluate alternative approaches, such as temporal multiplexing with different illumination sources.

An important characteristic of hyperspectral cameras is the excellent wavelength resolution over a wide range. Depending on the application, different spectral ranges can be used, most commonly the range 900 to 1700 nm (SWIR InGaAs detectors), but also 400 to 1000 nm (visible and NIR silicon detectors). A typical approach is to illuminate the object with a broadband source and to spectrally split or diffract the light in the camera. When using an areascan (2D) camera, one dimension on the detector chip is then required for separation into wavelengths (spectral resolution). The camera can then only be used as a line scan camera. In this case, information from many wavelength ranges is available for each line, which is why a relative movement between the camera and the object is necessary.

Typical industrial spectral cameras (Headwall, Specim, Ximea …) offer 150 to 250 different wavelength bands and a lateral (spatial) resolution of 640 or 1024 pixels. Depending on whether all or only a few bands are recorded, the cameras deliver line rates of a few 100 Hz up to several kHz. Often, however, the required resolutions or line rates cannot be achieved because the limiting factor is the available intensity level of illumination.

Halogen lamps are often used as the broadband light source. Their disadvantages, however, are energy consumption, heat generation and service life. By using different LED types with different emission wavelengths, broadband line lights from Metaphase or MTD can be used. In cases where only a few bands are required to detect the relevant material properties of the test object, it is sufficient to use a less complex multispectral system. One such example is the JAI Wave Series with simultaneous detection (up to 39 kHz) in bands 900 to 1400 nm and 1400 to 1700 nm. 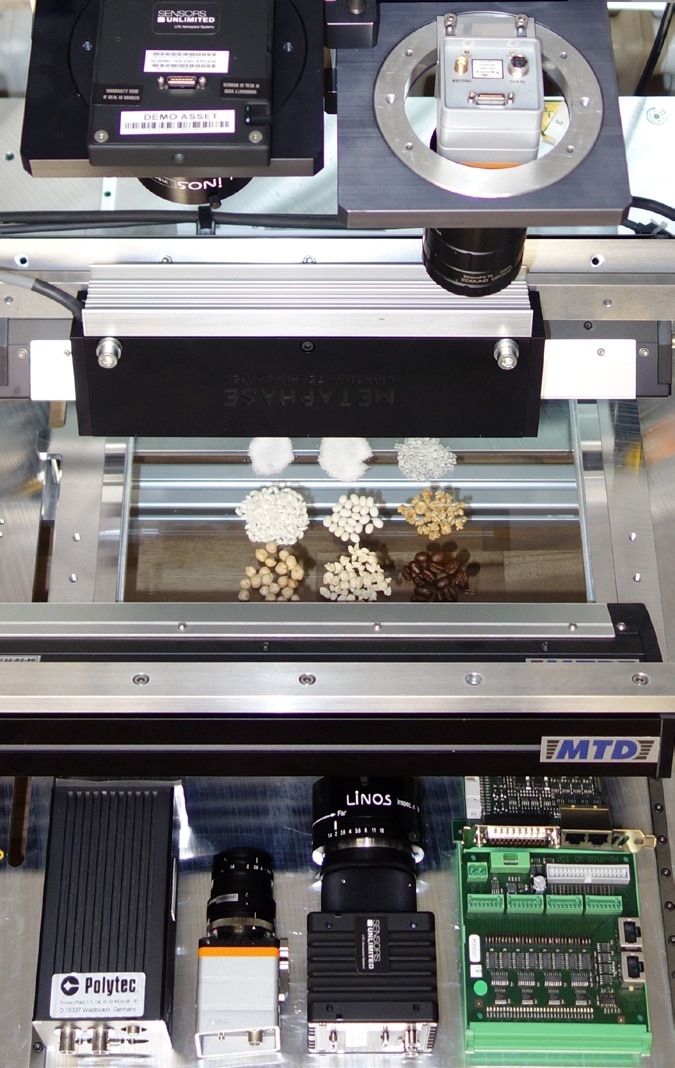 The use of a fast LED technology also allows the use of a temporal multiplexing. Instead of illuminating broadband and splitting the spectrum of light in the camera, a broadband sensitive chip is used, and the illumination spectrum is varied over time by means of fast triggering. For the image capture, only one line camera is required, but several line illuminations are necessary, each covering the different wavelength ranges. Alternatively, the individual wavelengths of the alternately assembled line lights can be switched individually. By using such an illumination with a fast IR line camera (Sensors Unlimited/UTC Aerospace, Xenics…) and a suitable frame grabber with extended functional range of Silicon Software, several wavelengths be recorded quasi-simultaneously.

To distinguish the materials, software is available from, e.g., Perception Park. For a system integrator, this means that on top of additional costs, there is also a new software interface that needs to be developed and maintained. In some cases, the existing Halcon library provides the necessary algorithms to classify a multi-channel image on pixel scale. Figure 2 shows how to capture different wavelength bands (2048 pixels, 3 kHz, four bands) by using standard hardware and how to associate materials on a pixel level using a standard software. To further simplify sorting systems MSTVision offers an interface to pneumatic blow-out units.

In order to limit the illumination spectrum (Figure 3) given by the LEDs to a narrower wavelength range, it is possible to provide each LED with a small filter. However, since this means additional effort in the manufacture of light sources, it is also possible to use a multi-bandpass filter in front of the lens and thus only select the relevant wavelengths at any point. Such filters can be developed application-specific (Chroma, Alluxa, Iridian…). For system integrators, two technical aspects should be noted here:

A preliminary test with a complete hyperspectral imaging system is useful to determine which wavelengths (ranges) are necessary for the material detection in a specific application. If it turns out that only a few wavelength ranges are sufficient, the described multiplexing will be a fast, suitable, and cost-effective implementation.