An application at Ophir-Spiricon [RIE] called for the beam analysis of a 1550 nm SWIR (Short Wave Infrared) laser source with a challenging optical arrangement. Signal loss occurred at each beam transfer across multiple reflective surfaces. A very sensitive camera with frame summing was required to bring out the full beam pattern, size, and depth.

The 1550 nm laser source was measured with an Ophir laser power sensor at 1.5 mW, with a beam diameter of 3.5 mm. The lab resources were limited to using a phosphor coated CCD camera that is sensitive to the wavelengths between 1140 nm and 1610 nm – covering in principle a large part of the SWIR wavelength range. The requirement of the analysis necessitated that the beam be reflected off different surfaces to document the changes of the beam image relative to absorption and reflection.

The initial test was conducted with a Spiricon phosphor coated CCD camera consisting of a standard silicon array of 1600 x 1200 pixels on 4.4 um pitch, producing a minimum dynamic range of ~30 dB, i.e., about 5 bits. The silicon array is coated with a thin layer of proprietary phosphor making the pixels sensitive to detection and imaging of light sources in the SWIR. This approach is quite effective when imaging a light source directly onto the array, especially with 1-2 mW of power. However, due to the extremely low sensitivity of this material, it is nearly impossible to image a reflected beam off an image plane as was required in this application.

The results of this initial test were totally unsatisfactory. No effective image of the beam could be detected or profiled. The low absorption of the phosphor coated CCD prevented any useful data from being gathered from this approach.

The solution was to use a Spiricon “XC130” camera, based upon a Xenics InGaAs camera type Xeva 1.7 320. This SWIR InGaAs camera was then installed onto the optical table. The resolution of this camera is 320 x 256 with a 30 um pixel pitch, and producing a dynamic range of about 66 dB (in high dynamic range mode) combined with low read noise. This degree of sensitivity allows the camera to detect very low power images from either a direct source or a beam reflected off an image plane as was needed in this application.

The InGaAs detector absorbs extremely well between 900 and 1700 nm. Due to the significant increase in sensitivity of the Xenics SWIR InGaAs camera, images of the beam from different reflected arrangements were now possible with great resolution. The fixture set up showing the XC130 InGaAs camera is in Figure 1. In this optical arrangement, the beam source was toward the left of the camera, reflected off an image surface to the right of the camera, back onto a reflective surface into the lens of the XC130 camera. With signal loss at each beam transfer, the Xenics SWIR camera using Spiricon BeamGage Professional beam diagnostic software was more than sufficient to image and profile the resulting image. 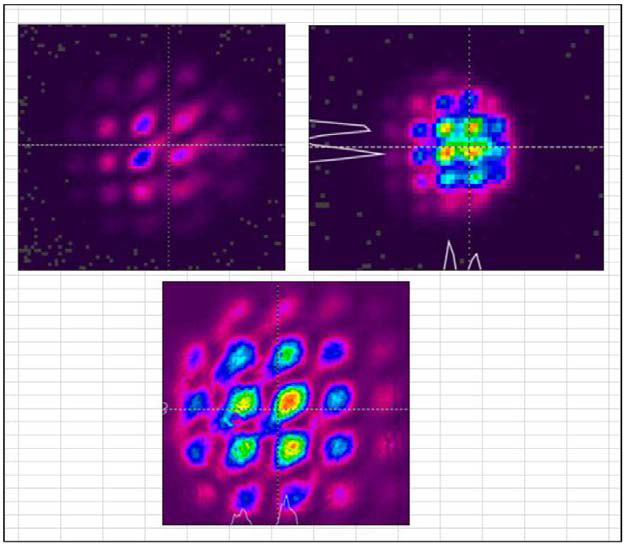 The typical progressive images of this 1550 nm source from different optical arrangements provided the following results (see Figure 2). Due to the changes in power density of the images depending upon power settings and the type of image plane, the Spiricon XC130 camera, using the frame summing feature when needed, was easily able to bring out the full beam pattern, size and depth to a point where accurate dimensional data and intensity values could be obtained and documented for the analysis of the project.